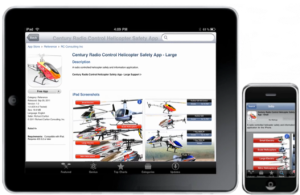 These iOS applications are free to download from the Apple App Store, and each is individually formatted for either the iPhone or the iPad. They contain information and links regarding radio control helicopter safety and a checklist that RC pilots may consider using when operating such aircraft.

“The Century Helicopter application is very useful for pilots and is extremely informative,” adds Myles Debski, lead developer of these Century applications. “While developing these applications, we focused on the importance of safety when operating RC helicopters. Of course, being an app that Apple had to approve, we needed to ensured that these apps be made visually appealing.”

While one application is designed for the screen size of the iPhone and the other for the iPad, both contain the same content and make heavy use of videos that are streamed to the application from the Internet. For best performance while running these applications, users should be connected to a WiFi network.

These helicopter safety applications make great reference material and also showcase the use of iOS applications that promote knowledge for a particular market segment.”

Richard Carlton Consulting, Inc., is one of the leading FileMaker consultancies in the United States. RCC has been successfully developing solutions for small and large businesses for 21 years. We provide customized database development services for business, government, and non-­‐profit organizations. With a team of 26 staff, we are capable of deploying both small and large solutions for a wide variety of customers.

iPhone, iPad, and iOS are trademarks of Apple, Inc., in the U.S. and other countries.

FM Starting Point is a fully unlocked FileMaker business template designed for use with FileMaker® Pro 11. Its functionality is focused toward small businesses, work groups, and non-profit organizations. FM Starting Point is based upon the FileMaker platform and works equally well on Windows and Mac computers, as well as on iPhone and iPad devices running FileMaker Go.

FMSP for English has been a hugely successful solution with over 150,000 downloads, and we wanted to bring this fantastic tool to FileMaker users from other linguistic backgrounds, within and outside of the United States,” explained Richard Carlton, CEO, RCC. “Our English version has always been completely free and unlocked; however, RCC has retained translation professionals to advise and assist in our conversion.

Due to the added cost of localization, the Spanish version of FM Starting Point is $99 per copy. Once paid for, there are no additional “hidden” charges, like project license keys or additional user fees. A user who buys a copy of FMSP in Spanish can customize her/his own solution and deploy it to an unlimited number of users.

Adam Russ, Product Manager for the localization effort added, “Of course, FMSP is based upon the FileMaker Pro platform. Users are still required to purchase appropriate copies of FileMaker Pro or FileMaker Go as their needs dictate.” A demo of FileMaker Pro is available at http://www.filemakertrial.com. A free trial version of FMSP in Spanish is available, as well, through RCC to allow users a test drive before they purchase the application.
“In the near future, RCC will be making FMSP available in other languages . Expect to hear from us soon regarding FMSP in Chinese (Simplified), Danish, Dutch, Italian, Japanese, and Swedish,” continued Russ.

Richard Carlton Consulting, Inc., is one of the leading FileMaker consultancies in the United States. RCC has been successfully developing solutions for small and large businesses for 25 years. We provide customized database development services for business, government, and non-profit organizations. With a team of 25 staff, we are capable of deploying both small and large solutions for a wide variety of customers.

I am pleased to announce that Richard Carlton Consulting is close to releasing a FREE FileMaker template for the job placement and recruiting industry.  This free tool is called RCC Recruiter, and will be available at www.rccrecruiter.com.  RCC Recruiter is designed to organize and dramatically improve efficiency of companies involved in corporate recruitment.  This FileMaker template supports multiple recruiters to simultaneously collaborating with each other, and sharing information about candidates, open requisitions, and resumes.  All candidate communication can be managed through RCC Recruiter, a centralized location to organize the latest information regarding a candidate or open requisition.  RCC Recruiter allows the actual candidate’s resume to be digitally stored inside the recruiter database.

Serving the FileMaker Community for 21 years